BURGERFUEL OPENS IN THE USA! They’ve knocked the bastard off!  BurgerFuel Worldwide are excited to announce the opening of their first USA based restaurant in Indianapolis, hot off the back of the Indy 500.

The flagship restaurant is located on a large stand-alone site in thriving Broad Ripple, a suburb filled with bars, clubs, eateries as well as four large universities. The area, which can be likened to the Auckland suburb of Ponsonby, attracts a lively crowd who travel there for the high energy social scene on offer.

USA-based BurgerFuel Founding Director Chris Mason comments, “We’ve got a great site in an awesome neighbourhood, a high energy team of staff who embody the BurgerFuel brand, a menu full of our very best gourmet burgers and sides and a community surrounding the store that has shown great excitement in the lead-up to the opening”.

“Our resident artist has been in Indianapolis painting around the clock to create custom designed murals, not only in our store but throughout the community of Broad Ripple. We also run our own global radio station and Radio BurgerFuel has been broadcasting live from Broad Ripple”.

“Car culture is a huge part of BurgerFuel, and our custom built ‘68 Ford Torino GT Fastback, and the ‘68 Plymouth GTX Hardtop (AKA the Evil Twins) have been causing an absolute stir on the streets of Indianapolis in the lead up to opening”.

BurgerFuel CEO, Josef Roberts comments; “While it’s been an epic challenge to open our first BurgerFuel store in the USA, we’ve done it. After ending our partnership with Franchise Brands following the passing of Fred de Luca, we decided to go it alone and open our first USA based store independently”.

“Like any store we open, you never know how it’s going to go until you swing the doors and start trading but we feel confident in the way that we have birthed the brand in the USA as well as all the resource and support we have provided for this historic opening”.

“BurgerFuel Indianapolis is a key milestone in the global journey of BurgerFuel. We’re now fully focused on getting this store pumping, and have our sights set firmly on further expansion in the USA”. 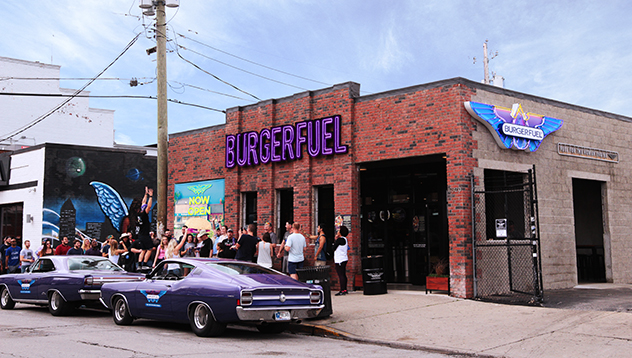 BurgerFuel® Worldwide (BFW) is a New Zealand gourmet burger concept serving fresh, natural, wholesome burgers and sides in an atmosphere as charged as the food. BurgerFuel has stores in New Zealand, Australia, America and the Middle East.

Download BFW BurgerFuel Opens in USA 05-17
Back to newsroom